In the late 1980s I was engaged and living with my fiancée for about four years. She battled with breast cancer for the last two years of our relationship. When she died, her two young children were then brought up by their father and grandparents.

Q. How did you deal with it?

I blocked it, right from the first diagnosis. I focused more effort in work than home life. In terms of her medical treatment and care, I avoided involvement as much as possible. We didn’t talk about the future.

Soon after her death, the day before the funeral actually, I decided that I would do something for charity. I enjoy cycling, so I pledged that for one year, for each mile I rode, I would donate a pound to charity. I rode alone or with friends. On my longest journey, over the mountains from Turin to St Tropez, I was supported by my best friend. My target was 1,000 miles. I achieved over 1300 miles. It was my way of saying goodbye.

The next winter I had two skiing holidays. On the second holiday I met someone who I married a year later. Little did I know it, but my fiancée’s death was no longer going to be the most horrible episode of my life. Marrying on the rebound.

I married someone I should not have married. I’d been engaged twice before. Third time lucky? No! It was a constant challenge. My wife had told me that she could not have children. I accepted that. Then she decided she did want children and I found out that I probably could not father a child. It was already an unsettled relationship. This additional aggravation compounded it.

Q. How did you deal with that?

We didn’t! We would go down to the pub, drink too much, and then quarrel when we got home. I mostly received a verbal battering. When it got too much or she got violent, I escaped in the middle of the night, taking refuge for a few hours at the office.

I should have divorced her. I naively hoped that she would just walk away. But she waited for what seemed an eternity, then divorced me, and got half of everything. I was fairly cheesed off.

Q. What possible message of encouragement can you give as a learning from those two different and difficult relationships?

When someone has a terminal illness (such as cancer) you can’t walk away from it, not if you love them. You must wait until their suffering ends, then move on.

When a relationship goes wrong and it can’t be fixed then you should end it. You cannot change another person. It has to be finished.

I knew my marriage was going to end. It just didn’t end fast enough. We dragged it out for a long period of time. Many do. It’s such a waste.

After the divorce, I had to move home. It was a clean break. I chose to stay near my friends. I did not have to worry about seeing my ex again. It was easy because there were no children involved. It’s probably much harder for those who have children. I kept the cats.

Q. Where are you now?

I don’t dwell on the past, but look forward to the future. I’m in another relationship with someone who I do love dearly. We both have our faults and idiosyncrasies, but these won’t stop us from sealing the relationship in 2013.

When I wrote my book Survive and Thrive after Trauma in 2012 a section shares interviews with those now thriving after an emotional challenge. Those I interviewed who shared their message will have continued along their path of increased learning, self joy and self awareness. We are not alone; should we choose we can learn from others, take and use information generously shared, be encouraged and in some cases, be enlightened.

Reproductive, IUI, Fertility TestimonialFertility: After two failed cycles and struggling to manage my anxiety and the lack of control and medicalization of it all I started looking for things I could do to help myself. I was fascinated by how quickly Susan was able to work with me to find my blockers and release the fear and anxiety I had unknowingly kept inside.read more
An appreciative clientI recently became totally overwhelmed by all that I have happening in my life, I felt alone and I was beating myself up over not being able to overcome various struggles.read more
Liz Merritt
We all enjoyed your talk immensely,so thank you!
Thank you for all your information and resources.
Liz M. Havant Complementary Health Group
read more 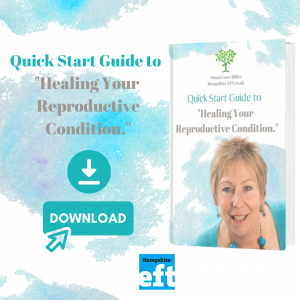